The present collection provides a digital platform for material and resources available mainly on Khoekhoegowab − but also on its immediate sister languages such as Haiǁ’om and ǂĀkhoe, as well as the, by now extinct Cape Khoekhoe varieties like !Ora (Korana), Xiri (Griqua), and Eini.

Khoekhoegowab is a Khoe-Kwadi language subsumed conventionally under the Khoisan languages of southern Africa. It is, today, the most widely distributed Khoisan language, both in terms of speaker numbers and their geographical spread. Khoekhoegowab speakers range from Nama communities in the Northern Cape region of South Africa to Damara communities in the northwestern extremes of the present day Namibia. Pockets of Khoekhoegowab speakers are also found in Botswana.

Its reference in literature has seen a considerable change historically − from Hottenttot (pejorative), Nama, Namaqua, and Dama, Damara, Bergdamara, to Nama/Damara and eventually Khoekhoegowab (a reference used after Namibia gained independence in 1990). The latter reference constitutes the official name of this language in Namibia.

Khoekhoegowab is based on the Latin script with additional characters added to include the representation of click consonants. The language is used for radio broadcasting in Namibia and South Africa. Weekly television news broadcasts are also transmitted in Khoekhoegowab in Namibia (alongside other indigenous languages). Furthermore, it can be studied also at university level in Namibia. In South Africa, it is taught on primary school level.

Figure 1 presents the distribution of Khoekhoegowab in southern Africa and the three major Khoisan language families. 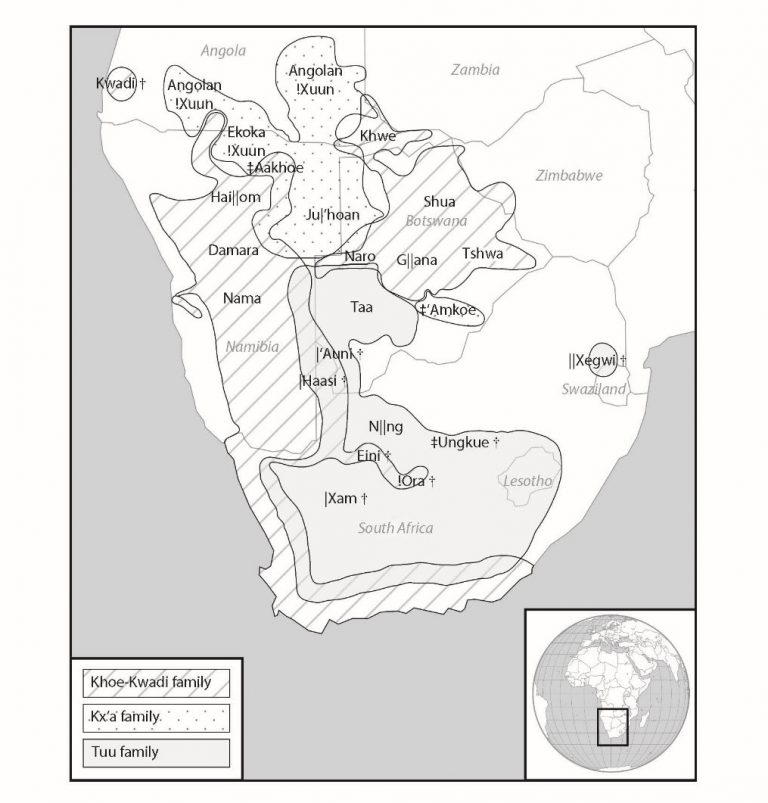